Silicon Carbide (SiC) is an advanced composite ceramic material developed for applications in Aerospace, Semiconductor Lithography, and Astronomy. This unique material has the highest combination of thermal and mechanical stability of any material which can be optically polished making it perfect for high performance lightweight mirrors mounted on aircraft and spacecraft for imaging, laser targeting and communications applications. Silicon carbide is also used in commercial applications such as lightweight scan mirrors, semiconductor wafer handling, and reflective imaging systems. AOS has pioneered an industry-leading process for manufacturing SiC optics for industry, defense, and research applications. We produce more SiC optics than anyone else in North America.

Should you be considering SiC for your application?

Our applications engineers can assist you to answer this question but here are few notes for guidance. There are four things to consider regarding SiC for your application:  Component Mass,  Thermal Operating Environment,  Dynamic Environment, and Cost. SiC is not the answer to every application, however, you might be surprised to discover that SiC is often the most affordable solution in addition to being the right technical choice. There are many different types of SiC and dozens of SiC material manufacturers around the word. AOS works with all different types of SiC and draws materials from many suppliers around the world. Therefore, you don’t need to worry about getting restricted to a specific brand. We can advise which SiC is best for you, and present the best options for you.  Properties of SiC vary by the method in which the SiC is made. There are both technical, and commercial trades to consider. Its our job to sort this out for you. Sintering is a process of forming a solid mass which employs heat and pressure to cause fusion of powdered particles to from structures. First silicon carbide powder is mixed with sintering aids, typically carbon and boron. This mixture is then pressed into a mold. This compact is then sintered in an inert atmosphere at temperatures below the melting point.

Hot press sintering is the same process as sintering just with higher temperatures and pressures. Sintering aids such as carbon, boron, or alumina can be used to reduce required temperatures. This process creates a full density silicon carbide.

This variation of the sintered process infiltrates silicon during sintering of a green-state form at approximately 1700K so that the carbon in the material powder reacts with silicon to become SiC. 100% of the carbon and silicon react leaving no residual carbon. Reaction sintered SiC has been demonstrated to yield extremely high flexural bending strength often twice that reported for most sintered SiC.

Chemical vapor deposition is used to produce ultra-high purity silicon carbide. This process is conducted by exposing a wafer to silicon and carbon containing precursors. These precursors are reduced at high temperatures to form silicon carbide, while the by-products are removed with gases. Chemical vapor deposition creates extremely high purity silicon carbide with excellent thermal conductivity. However, this process has the highest production costs and may result in high residual stresses. Properties are anisotropic due to the columnar grains formed during the process.

Converted SiC Chemical Vapor Conversion is a process whereby structures and substrates are conventionally machined to near-net shape from graphite material. The graphite preform is then reacted with SiO in a chamber and converted to pure beta-phase silicon carbide with low porosity (which may be backfilled with silicon). A thin CVD SiC or Si coating is applied to result in an ultra lightweight, high purity substrate with excellent thermal conductivity. Also within this family of SiC is carbon fiber reinforced silicon carbide (C/SiC). The addition of carbon fiber “whiskers” enable a number of advantages that are manifested as increased bend strength, high fracture toughness, and electrical conductivity. 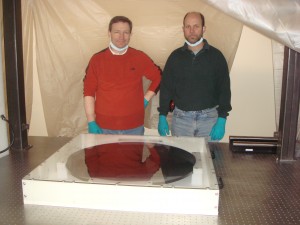 AOS produces both custom (build to print) SiC optics and also provides internal products such as satellite telescopes and industrial scan mirrors. Specifications for Scan mirrors can be found here.

Custom Products are available according to the following specifications:

Low surface roughness is achieved on all material types either by direct polishing of CVD and Sintered materials or with SiC claddings applied to RB-SiC and Composite SiCs. Send us your drawings or specifications and we’ll begin preparing a quote for you.

Contact us today to speak with an applications engineer.

AOS is ITAR registered. We request that you send any ITAR applicable information by a secure method.

Request More Information About This Product